84(a)(90)[1] In the snow there are shaggy worm-like creatures. [2] In Cyprus, where copper ore is smelted, a creature slightly larger than a fly is generated: the same thing happens in the furnaces at Carystus. [3] Some things die when separated from snow, others, from fire.
(b)(91) The salamander extinguishes fire.

85(92) [Aristotle] says that around the river Hypanis in the Cimmerian Bosphoros, about the summer solstice, things like wallets, larger than grapes, are carried down, from which when they break open a four-footed animal emerges which lives for one day: it is singular as a winged creature in being four-legged.

86(93) Hives come to destruction if there are no leaders or, on the contrary, there are [too] many.

87(94)[1] Land scorpions [skorpios] are killed by their children. [2] The venom-spider [phalangion], too, kills its mother and often its male parent as well, for they incubate the eggs jointly.

88(95) Things like small eruptions form in human flesh: if one pricks them, lice [phtheir] emerge; and if a person is moist, this disease can be fatal as with Alcman the lyric poet and Pherecydes the Syrian. 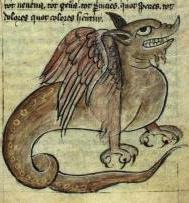